The Flying Plank gets color and texture!

Welcome back to the Flying Plank RR. 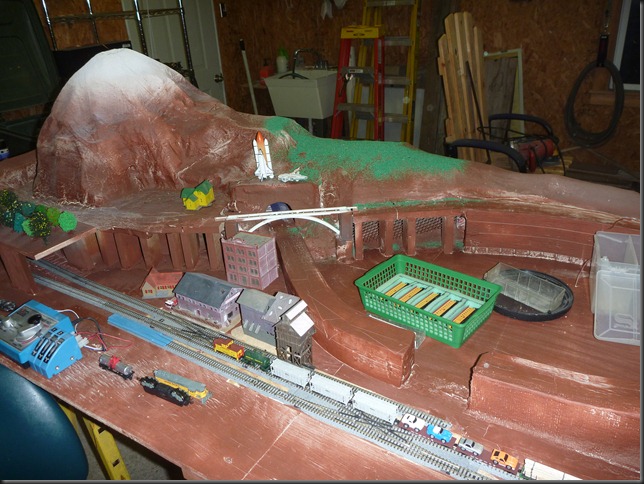 Recently I removed all the track, most of the wiring, and painted the whole thing.  The plaster casting material I used dried with a mesh texture, so the first coat of paint applied was mixed with plaster dust to make a thick brown paste.  This smoothed out most of the grid texture and also provided the base color for parts of the landscape.  For the rest I picked up a quart of sandy beige on the discount rack at Walmart and coated everything heavily with that.  Then while the beige was still drying I took a spray-can of brown primer and randomly sprayed it all over it.  This resulted in a nice uneven range of colors from streaks of beige to some large patches of chocolate brown.  The peak of the volcano I simply wetted with a spray bottle and sprinkled more plaster powder over it like a snowstorm.  As the whole mish-mash dried cracks formed here and there where the “sandstone” shows thru.  I also took the opportunity to eliminate all the Atlas snap-track in preparation to lay down Kato unitrack throughout. As you see, the left end of the layout will be a rocky gully running through hills.  The outer (lower) loop is complete and running.  So I grabbed some rocks from the driveway and hot glued them in as giant boulders.  I then spread around a bag of ballast and a bag of tan rocks.  Basically I dumped them into the canyon and then used a paintbrush to clear the track and mound it up.  Once the upper loop is running it will get the same treatment. 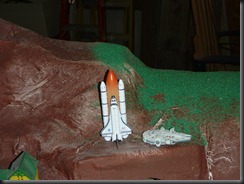 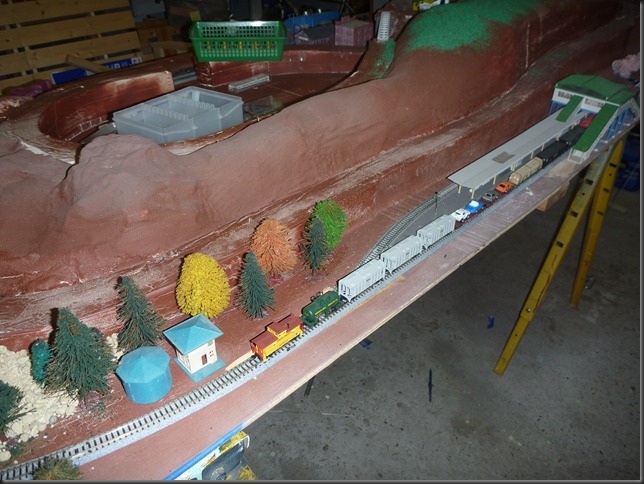 Also visible in a couple places is the patch of green turf spread out on one of the hills.  Instead of bothering to glue it down I just shook it out up there to see how it looks.  Its pretty bright, so maybe it needs to be mixed into some darker green turf. I will suck it up with the little shop vac and reuse it elsewhere.  I mean to spread glue all around the trees and then sprinkle a mixed up batch of various green turf varieties.

This side of the layout is intended to represent a Japanese suburban train stop.  The outer loop of track is setup to accommodate a bullet train set.  Someday over the rainbow when I can afford one, I hope to be able to park it on the siding that runs through the inner side of the passenger station. 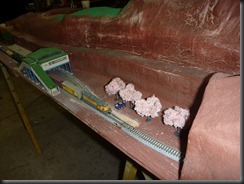 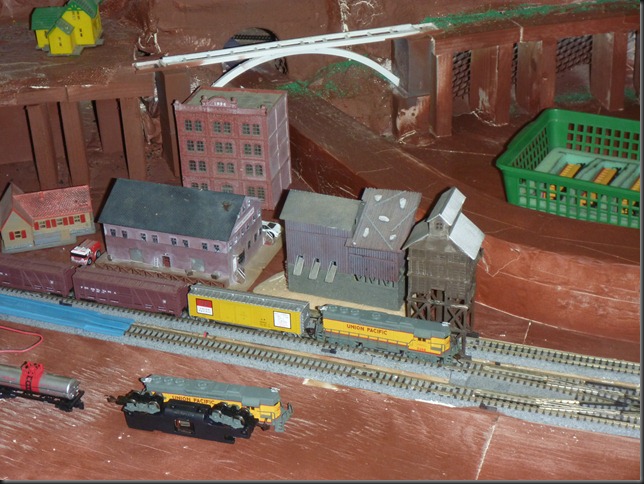 Here is the Small town on the other side.  This provides an opportunity for me to use up the old buildings I had in the box of random n-scale junk.  I’m thinking an old industrial town that has seen better years.  The bank building has seen better days, as has the coal elevator.  But they could afford a modern fire truck at least.  And somebody in town is loaded, as you can see their Lamborghini parked behind the warehouse.  =)

The cars on the layout will all be Micro-Machines.  Maybe they are not perfectly to scale, but they are fun! 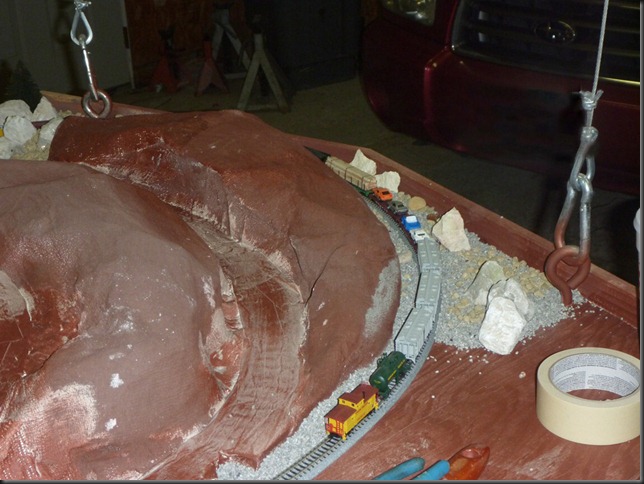 When this whole thing is done, I may well have the first inter-continental, time-traveling railroad!

Posted by JKaechler at 7:45 PM