The Life, Death, and Rebirth of a Quadcopter.

Some time ago, my job required the use of a “drone” to do some visual survey work.  Research for that project led us to the DJI Phantom FC40.   That project went off without a hitch, and the FC40 stayed with me as I gradually paid the company back for the purchase.  This thing was a great platform for aerial photo and video!

Here is is in its original configuration.  One photo is a stock pic from DJI’s website, and the other is from a night flight I did here at home. 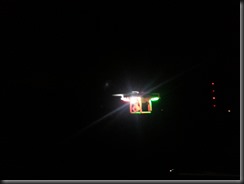 I ran the FC40 thru many recharges, picked up a second battery pack, and did some very cool flights into cloud cover.  When the FC40 disappeared from view, I had a reasonable certainty that its GPS system would be able to bring it back home.

From the beginning I viewed the FC40 as really fancy training wheels, knowing as soon as I flew it the first time that I was hooked.  More RC flight definitely lies in my future!

Here is a video tour of our yard from March 2015.  Pay no attention to the people in the driveway.

Notice tho, that I speak of the FC40 in the past tense….   That is not an accident.  In April of 2015, I had done some repair work on the FC40.  After some hard landings the legs were cracked, as was the body shell where the legs attached.  So I got new legs for it, a new body shell (which I painted red), and rebuilt it.     While I was at the rebuild, I also added a 2-axis gimbal so that my videos would stabilize and I would be able to tilt the camera down. 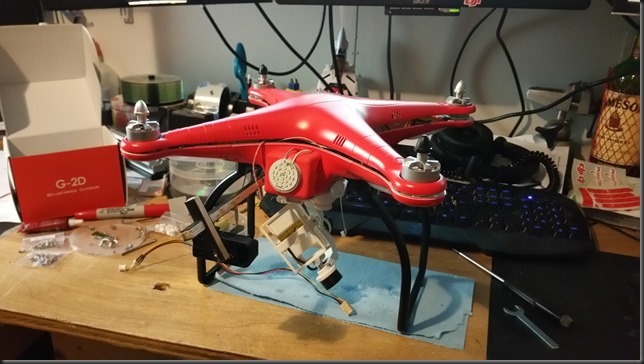 This image was taken as I rebuilt it, just a few days before the final tragic crash.  Note the gimbal hanging under it, and the altimeter mounted out front on a carbon-fiber and balsa outrigger.  This pic shows the red casing still open, as there was still some wiring to do.

On doomsday, as I took it out for its first test flight since the rebuild, I had a stock battery in the compartment and the camera mounted to the gimbal for testing.  It was not filming however.  I wish it had been, I might have more of an idea what happened.

The FC40 lifted off from the ground, and hovered at about head height for a few minutes as I carefully tested the controls in each direction and worked the camera gimbal up and down a few times.   Seeming to have everything under control, I eased it into forward flight.  This is where everything went wrong.

The quadcopter suddenly went into full climb and took of to the south.  As soon as I saw what was happening, I pulled the mode switch out of GPS mode and back into “ATTI” (attitude control with no GPS).  This done I was able to turn it and begin bringing it down.  However, once it was turned to face back toward home it kept on coming full speed.  When it hit the side of the house, it appeared to be up on its side, as if it was trying to accelerate for everything it had.  The noise was horrendous, and I will probably never forget the sad slide to the ground.  Given the behavior, I had either a terrible GPS malfunction or the ‘Center of Gravity’ was way wrong.  Either way, I only had control over climb, roll, and yaw, but not pitch.  And climb control was not responding either right at the end.

The wreck sat on a shelf for a couple weeks, while I just looked at it and debated with myself how to rebuild it.  Fast forward a month……

Meet the Phoenix.  Rising from the ashes of the smashed FC40, using the motors, props, camera, and batteries of the FC40.  And all the lessons learned….. 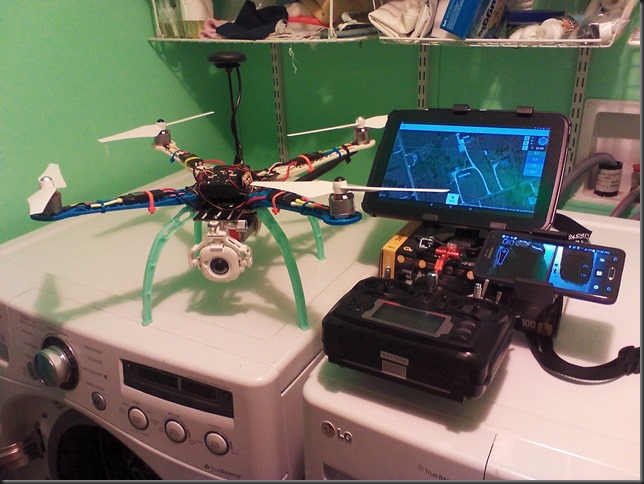 This new quadcopter has a much more advanced flight computer, a telemetry radio that talks back to my tablet,  and a Sonar module that gives it more accurate altitude readings than the onboard barometer.  The mast sticking up near the back is the GPS antenna and compass.

The telemetry system is a USB module that can also plug into a computer, and it is with that that I do calibrations and programming of the flight controller.  When running on the tablet, it overlays the aircraft position on a google map, and displays a dashboard of flight data to the right.  The smaller screen (my phone) recieves the image from the FC40 camera, just as it did before.

Still to come on this newly reborn quadcopter:   A 2-axis gimbal ( I still want stabilized video), and maybe a GoPro camera instead of the DJI unit.

The Sonar is still in test mode, and I am waiting on a software patch (for the flight computer) to come out before I do more than careful test flights in the driveway.  So far, it has flown once and had zero problems.  Once I get comfortable with it in this form, I may upgrade the motors and props to larger models that can lift more battery.  More battery = longer flights.  The frame I chose can take up to 12” blades, which should lift more than the current 9” set.

P.S.  Please don’t call them “Drones”!  That word scares people, and makes the media foam at the mouth.  Call these the more accurate term “Quadcopters”.   Anyone who is involved in the hobby could go on at length why the quadcopters are very different from the “drones” that the military uses.

P.P.S.   For some entertaining reading on RC technology, check out the website for the flight controller I am using.   https://pixhawk.org/modules/pixhawk

Posted by JKaechler at 8:59 PM No comments: