I was listening to some of my cow-workers bleating on and on about his apple iPad today, and wishing he would just shut up.   But he got me to thinking, I had read an article somewhere that truly expressed the nature of Mac people.  I went looking for it, and I found it!    Consider that the following article was written in 2007, by a british guy.  That was pre-iPhone, and yet the general attitude has not changed.  Neither has Apple’s insistence on control and restriction.  So, after reading this bit, try your best not to stare at the slavering hordes of brainwashed, non-sentient, Steve Jobs worshippers that you might trip over.  They will resume functioning once they have gotten over the launch of yet another high priced, glamourous, and ultimately useless device.  Enjoy…….

Charlie Brooker
Monday February 5, 2007
The Guardian
Unless you have been walking around with your eyes closed, and your head encased in a block of concrete, with a blindfold tied round it, in the dark - unless you have been doing that, you surely can't have failed to notice the current Apple Macintosh campaign starring David Mitchell and Robert Webb, which has taken over magazines, newspapers and the internet in a series of brutal coordinated attacks aimed at causing massive loss of resistance. While I don't have anything against shameless promotion per se (after all, within these very brackets I'm promoting my own BBC4 show, which starts tonight at 10pm), there is something infuriating about this particular blitz. In the ads, Webb plays a Mac while Mitchell adopts the mantle of a PC. We know this because they say so right at the start of the ad.
"Hello, I'm a Mac," says Webb.
"And I'm a PC," adds Mitchell.
They then perform a small comic vignette aimed at highlighting the differences between the two computers. So in one, the PC has a "nasty virus" that makes him sneeze like a plague victim; in another, he keeps freezing up and having to reboot. This is a subtle way of saying PCs are unreliable. Mitchell, incidentally, is wearing a nerdy, conservative suit throughout, while Webb is dressed in laid-back contemporary casual wear. This is a subtle way of saying Macs are cool.
The ads are adapted from a near-identical American campaign - the only difference is the use of Mitchell and Webb. They are a logical choice in one sense (everyone likes them), but a curious choice in another, since they are best known for the television series Peep Show - probably the best sitcom of the past five years - in which Mitchell plays a repressed, neurotic underdog, and Webb plays a selfish, self-regarding poseur. So when you see the ads, you think, "PCs are a bit rubbish yet ultimately lovable, whereas Macs are just smug, preening tossers." In other words, it is a devastatingly accurate campaign.
I hate Macs. I have always hated Macs. I hate people who use Macs. I even hate people who don't use Macs but sometimes wish they did. Macs are glorified Fisher-Price activity centres for adults; computers for scaredy cats too nervous to learn how proper computers work; computers for people who earnestly believe in feng shui.
PCs are the ramshackle computers of the people. You can build your own from scratch, then customise it into oblivion. Sometimes you have to slap it to make it work properly, just like the Tardis (Doctor Who, incidentally, would definitely use a PC). PCs have charm; Macs ooze pretension. When I sit down to use a Mac, the first thing I think is, "I hate Macs", and then I think, "Why has this rubbish aspirational ornament only got one mouse button?" Losing that second mouse button feels like losing a limb. If the ads were really honest, Webb would be standing there with one arm, struggling to open a packet of peanuts while Mitchell effortlessly tore his apart with both hands. But then, if the ads were really honest, Webb would be dressed in unbelievably po-faced avant-garde clothing with a gigantic glowing apple on his back. And instead of conducting a proper conversation, he would be repeatedly congratulating himself for looking so cool, and banging on about how he was going to use his new laptop to write a novel, without ever getting round to doing it, like a mediocre idiot.
Cue 10 years of nasal bleating from Mac-likers who profess to like Macs not because they are fashionable, but because "they are just better". Mac owners often sneer that kind of defence back at you when you mock their silly, posturing contraptions, because in doing so, you have inadvertently put your finger on the dark fear haunting their feeble, quivering soul - that in some sense, they are a superficial semi-person assembled from packaging; an infinitely sad, second-rate replicant who doesn't really know what they are doing here, but feels vaguely significant and creative each time they gaze at their sleek designer machine. And the more deftly constructed and wittily argued their defence, the more terrified and wounded they secretly are.
Aside from crowing about sartorial differences, the adverts also make a big deal about PCs being associated with "work stuff" (Boo! Offices! Boo!), as opposed to Macs, which are apparently better at "fun stuff". How insecure is that? And how inaccurate? Better at "fun stuff", my arse. The only way to have fun with a Mac is to poke its insufferable owner in the eye. For proof, stroll into any decent games shop and cast your eye over the exhaustive range of cutting-edge computer games available exclusively for the PC, then compare that with the sort of rubbish you get on the Mac. Myst, the most pompous and boring videogame of all time, a plodding, dismal "adventure" in which you wandered around solving tedious puzzles in a rubbish magic kingdom apparently modelled on pretentious album covers, originated on the Mac in 1993. That same year, the first shoot-'em-up game, Doom, was released on the PC. This tells you all you will ever need to know about the Mac's relationship with "fun".
Ultimately the campaign's biggest flaw is that it perpetuates the notion that consumers somehow "define themselves" with the technology they choose. If you truly believe you need to pick a mobile phone that "says something" about your personality, don't bother. You don't have a personality. A mental illness, maybe - but not a personality. Of course, that hasn't stopped me slagging off Mac owners, with a series of sweeping generalisations, for the past 900 words, but that is what the ads do to PCs. Besides, that's what we PC owners are like - unreliable, idiosyncratic and gleefully unfair. And if you'll excuse me now, I feel an unexpected crash coming.

Thank you Mr. Brooker!  Your eloquence astounds me.

This year will bring us an extremely significant date.  October 10th, 2010.   In binary, 101010=42!  In case you don't know, 42 is the ultimate answer.  Or, if you prefer, 42 in science terms.  My references include a site that has been up for almost a year now, wolframalpha.com is a functional repository of scientific knowledge.  Anything that you can enter into that site in scientific terms you will get some interesting results. 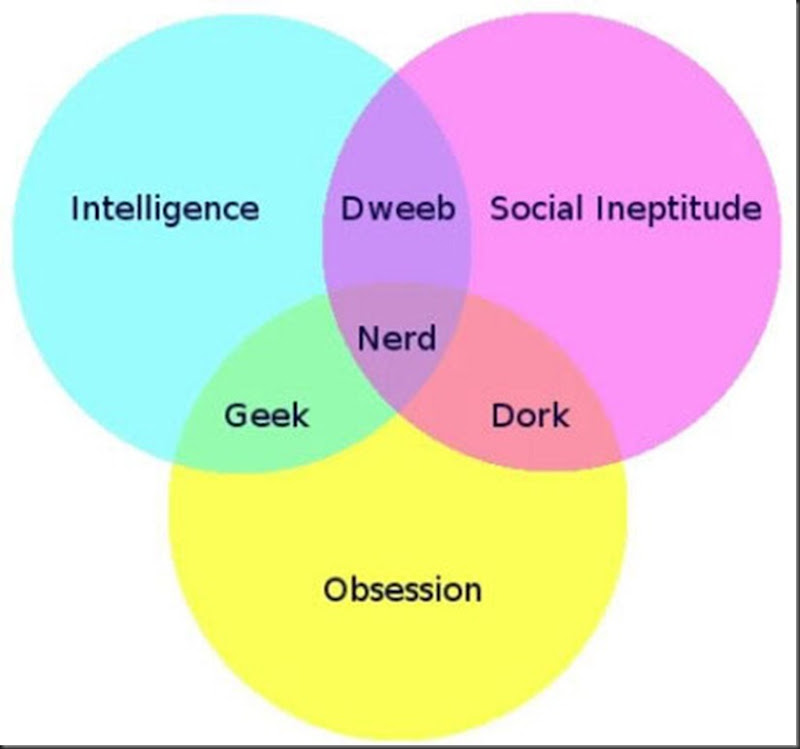 This finally provides an explanation for the terminology that we all use.  Most people use the terms “geek”, “nerd”, and “dork”, interchangeably.  I have always felt that was inaccurate. Here finally, is a proper way to show someone how to define it.

According to this chart, I am either  a geek or a nerd.  I lean more to the geek side, since I do have a few social skills (at least, more than some of the other nerds/dorks that I have met).

And, check this out!   If this is half as awesome as the original movie it will blow all of our minds!

Finally, huge props go out to the

“Current Geek” podcast!  These guys dig up the best topics, and cover them from the perspective of sci-fi fans, and science enthusiasts!  I highly recommend this to all the geeks out there. (refer to the diagram to see if you qualify)
Posted by JKaechler at 9:54 AM No comments:

a work in progress

i am in the midst of migrating over to wordpress.   please excuse the mess for a bit.......
Posted by JKaechler at 5:23 PM No comments: